Authentication in SPA (ReactJS and VueJS) the right way - Part 2 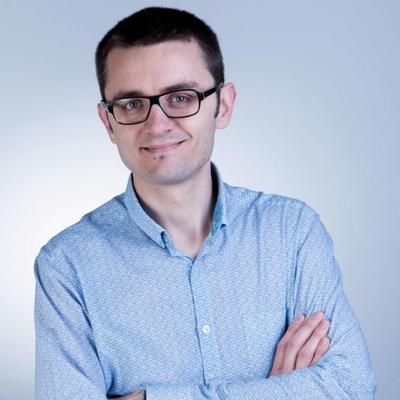 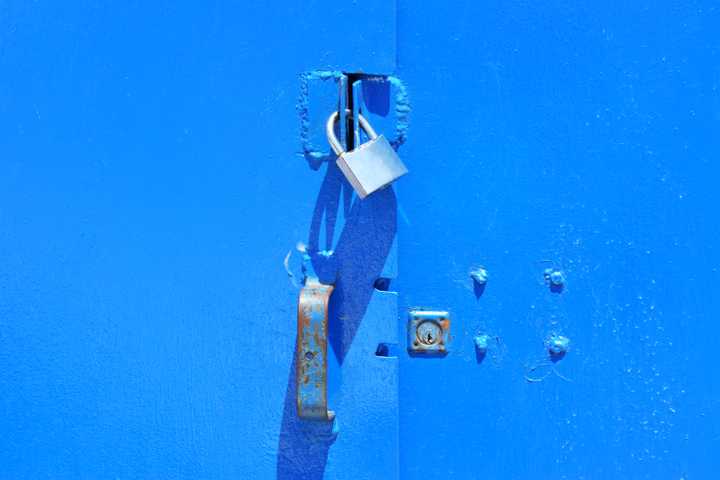 Photo by Chris Barbalis on Unsplash

When you create a web application or a SaaS service, you want to restrict access to registered users only. You need to authenticate your users; in other words, you want to know who is using the application: authentication, and you need to know whether they have the right to do the requests: authorization. Authorization means deciding which resources a certain user should be able to access, and what they should be allowed to do with those resources.

Before going further into the implementation in a ReactJS or VueJS SPA (Single Page Application) apps, we will go through protocols that are involved nowadays in authentication and authorization.

You have 2 options to identify your users

We will focus on the IdP option!

There are two dominant open web standards for online identity:

OpenID Connect, published in 2014, is not the first standard for IdP, but definitely the best in terms of usability and simplicity, having learned the lessons from past efforts(SAML and oldest version of OpenID).

SAML is/was very common in corporate environments as it is the oldest standard. It was originally developed in 2001, and its latest major update was in 2005.

Basically if you are new in IdP and you don't have to manage legacy stuff, you can ignore SAML.

We need to define first what is OAuth 2.0 before digging into OpenId connect.

OAuth 2 defines the flows to authorize access to a resource, whereas OIDC defines and normalizes the content of the messages involved in those flows. It also uses the messages to carry out the identity of the user.

OAuth 2.0 is an authorization framework, not an authentication protocol. OAuth2 is generic so that it could be applied to many authorization requirements (API access management, IOT services, ...).

OAuth2 provides secure delegated access, meaning that an application, called a client, can take actions or access resources on a resource server ** on behalf of a user, without the user sharing their credentials with the application**.

OAuth2 does this by allowing tokens to be issued by an identity provider to these third-party applications, with the approval of the user. The client then uses the token to access the resource server on behalf of the user. We talk about access token. Those tokens typically have a limited lifetime.

Deciding which one is suited for your use case depends mostly on your client's type, the trust for the client (web app, mobile/native app, server), or the experience you want your users to have.

OAuth 2.0 defines 4 major grant flows to delegate access on behalf of a user:

And two additional flows for specific use cases:

I recommend to understand at least the 2 followings: 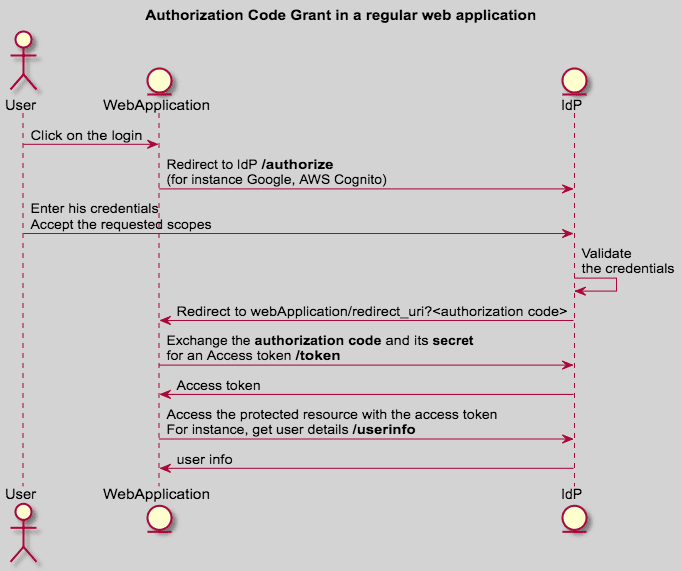 Authorization Code is used when you can protect/secure a secret. For instance, you have a backend server (like in a regular PHP web-app) that is hosted in a secured place.

The secret must NOT be shipped into the application source code or binary that is deployed on the user browser, mobile, or desktop: security through obscurity is not valid at all.

The Implicit grant type is a simplified flow that can be used by public clients, where the access token is returned immediately without an extra authorization code exchange step. 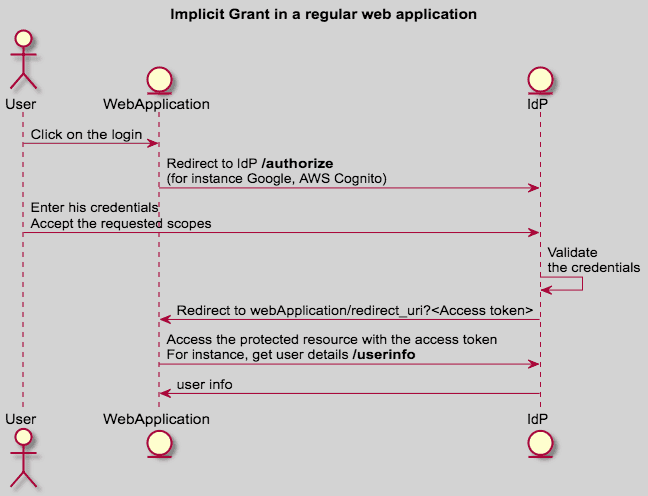 We will discuss those two flows in the security chapter.

Back to OIDC: OAuth2 is the basis for OpenID Connect, which provides OpenID (authentication) on top of OAuth2 (authorization) for a complete security solution.

OIDC uses simple JSON Web Tokens (JWT) for the token format, which you can be obtained using flows conforming to the OAuth 2.0 specifications.

OIDC purpose is to give you one login for multiple app/websites. Each time you need to log in to a website using OIDC, you are redirected to your OpenID site where you log in, and then taken back to the website.

For example, once you successfully authenticate with Google and authorize a client app to access your information, Google will send back to the client app information about the user and the authentication performed. This information is returned in a JWT format. The client app will receive an Access Token and, if requested, an ID Token that contains the user identity in a JWT payload.

The benefits of JWT are consequent:

In your SPA, only 2 flows can be used:

The implicit grant is generally not recommended. The flow was written in the time where browser javascript was unable to perform cross-domain requests. The implicit grant relies only on GET requests and browser redirection with the usage of the URL fragment (https://YOUR_DOMAIN/#access_token) It is now discouraged from using it in the RFC.

The implicit grant has the following flaws:

We will go deeper into security flaws in the next section.

Today, Cross-Origin Resource Sharing (CORS) is universally adopted by browsers, removing the need for this compromise. CORS provides a way for JavaScript to make requests to servers on a different domain as long as the destination allows it. This opens up the possibility of using the Authorization Code flow in JavaScript on browser-side with the PKCE extension instead.

Authorization code in a SPA with a backend server

Here is an implementation proposal to do an authorization code grant in a Single Page Application. The JWT is stored in a cookie as recommended in my previous article. 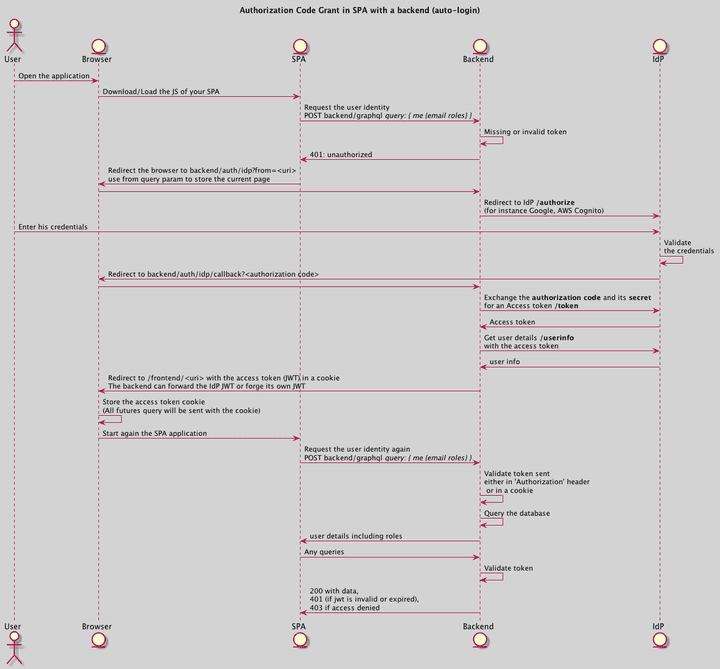 The main advantages are:

Authorization code in a SPA on browser-side only

The authorization flow can now be done on the browser only thanks to the PKCE extension. It is then recommended if you can access a backend server without a valid token.

In addition to what has been discussed in my previous article, the authentication flows increase the attack surface. I will try to list the potential attack and the corresponding mitigation. Full list available here.

The signature and the expiration date of every token should always be verified. The OIDC discovery documents contain the signature algorithm and the public key to use to verify the signature.

The goal for the attacker is to steal the token and reuse it to impersonate you. It can be done thanks to

An attacker who owns a site A, can try to reuse user token on another site B that use the same IdP. For instance, the attacker has a web site A that uses Facebook Connect to authenticate and grant access to his website. The attacker can try to get the user tokens (from the server that he owns) and reuse them on a targeted website B that also use Facebook Connect and has weak audience verification.

In technical words, a JWT token issued by a public IdP for a site A could be reused for a site B that uses the same IdP and has weak issuer and/or audience verification.

The JWT payload defined in OIDC has 2 important text fields:

If the issuer or audience doesn't match the white list, an unauthorized exception should be throw.

The goal here for an attacker is to send an email to a victim with a specific link.

Let say you own a website A that uses authentication code grant flow to authenticate your users. Your website is a SaaS service that bills monthly.

An attacker can try the following:

the server will exchange the given code for an access token. The access token will contain the attacker's identity.

The same attack can be performed with both Authorization code or access-token if the implicit grant flow is used.

Phishing and token replay can be used at the same time; for instance, a malicious website can use an iFrame to change the currently connected user silently.

The attacker may take advantage of an open URI redirection configuration on the IdP to redirect the user browser into a malicious website that can steal the user access token.

This article contains a lot of information about concepts and security concerns for your SPA. I recommend the Authentication code grant flow with a server or in the browser only with PKCE. You need to understand the core concept to make sure you don't leak the token, and you secure your app properly against CSRF and phishing, especially when you use a public/shared identity provider IdP (CSP, white-list issuer, white-list audience, no pattern in redirection URI, random state to control the flow initiator).

In case you missed the first part: